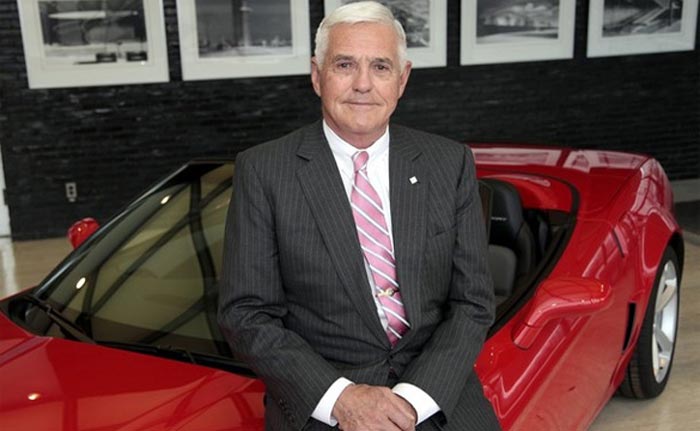 Former GM Vice Chairman Bob Lutz may not be privy to the day-to-day happenings with the Corvette team, but that doesn’t mean he’s out of the loop either. And every time he weighs in on the C8 Corvette, you should listen turn off all distractions and listen to what he has to say.

Bob was at GM prior to bankruptcy and was a supporter of the Corvette team’s mid-engine plans. But you know the sad story, GM’s bankruptcy forced the Corvette team to put those plans on the shelf and instead the front-engine C7 was designed in its place (still a happy ending!).

This time, “Maximum” Bob is talking about the C8’s pricing structure and our colleague John Elegant over at the MidEngineCorvetteForum.com put together a great write-up on those comments which we are sharing below:

We heard Bob Lutz on Autoline three months ago say that he thought that the C8 would cost about $5,000 more than a C7. Bob quickly added that he was out of the loop (a self-effacing, but not accurate comment as it turns out as per below).

Thanks to Fasttoys for sharing with us that in this Dec ’18/Jan ’19 issue of Road and Track(thanks R&T), we learned that Bob Lutz said, in its “Ask Bob” segment (page 112), that “the goal is to sell the C8, version for version, at a little more than the C7.”

However, in reaction to those estimates, many disagreed, expressing strong feelings that such pricing was wildly optimistic, that instead, it would start at least $85,000, some believing over $100,000, and criticized the validly of that $60K-$70K range noting such things as, just as Bob Lutz himself self during his AutoLine interview, that he was out of the loop, and the other two were well-meaning true outsiders.

Corroboration that the entry 2020 ME Corvette would start much higher than that $60K-$70K price range, came around six weeks ago, from past Chief Corvette Engineers Dave Hill, Dave McLellan, and Bob Wallace, with their unanimously indicating their belief that it would be in a significantly higher price range than $60,000-$70,000 to start.

However, a recently verified, impeccable source, confirmed that Bob Lutz is currently very much in the GM loop about the ME. While of course he is not involved in engineering, design, nor similar, Bob is far from in the dark about the ME. He knows a ton of intimate C8 details at this time. Thus, IMO, the fact that Bob is again now re-stating his belief that GM’s goal is to “C8 is going to be a little more than the C7” (version for version), suggests even more confirmation that, along with other reputable and informed sources mentioned above, that the starting price of a 2020 mid-engine Corvette, again sticker with no options, would be less than $70,000.

Here is “Maximum” Bob’s exact statement in this month’s Road And Track: 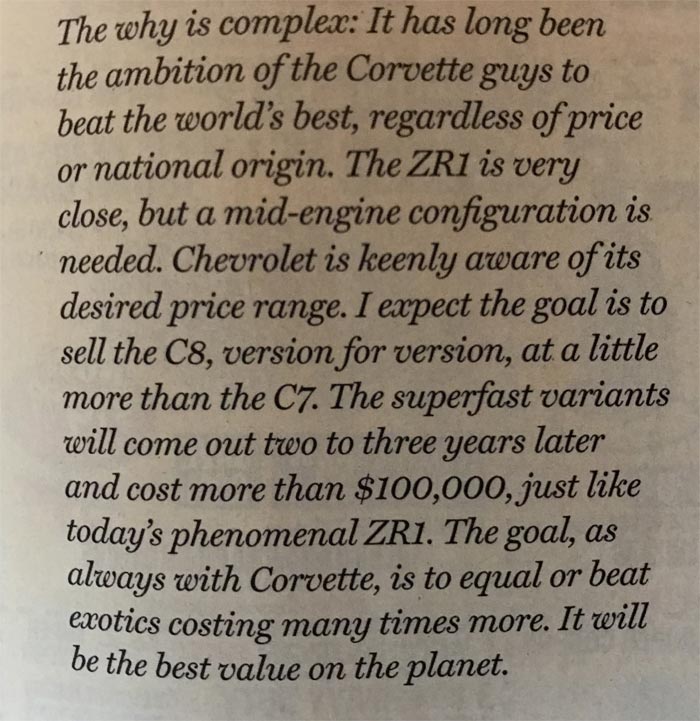 Thanks John for that great recap!

We have always maintained that the C8 would still be an affordable Corvette in the tradition of the C7 and those that came before. We can imagine that once the car is revealed, but before pricing is announced (because pricing is never revealed when the car is) that a Corvette team member will be heard saying “If you can afford a C7 Grand Sport, you can afford a C8”.

What’s your take on the Bob Lutz and his comments on C8 pricing? Let us know below or head over to the MidEngineCorvetteForum.com and jump into the conversation with like-minded Corvette enthusiasts.

Here’s Everything We Know About…

CORVETTE C7.R TO RACE IN…

The first photos of Chevrolet’s…